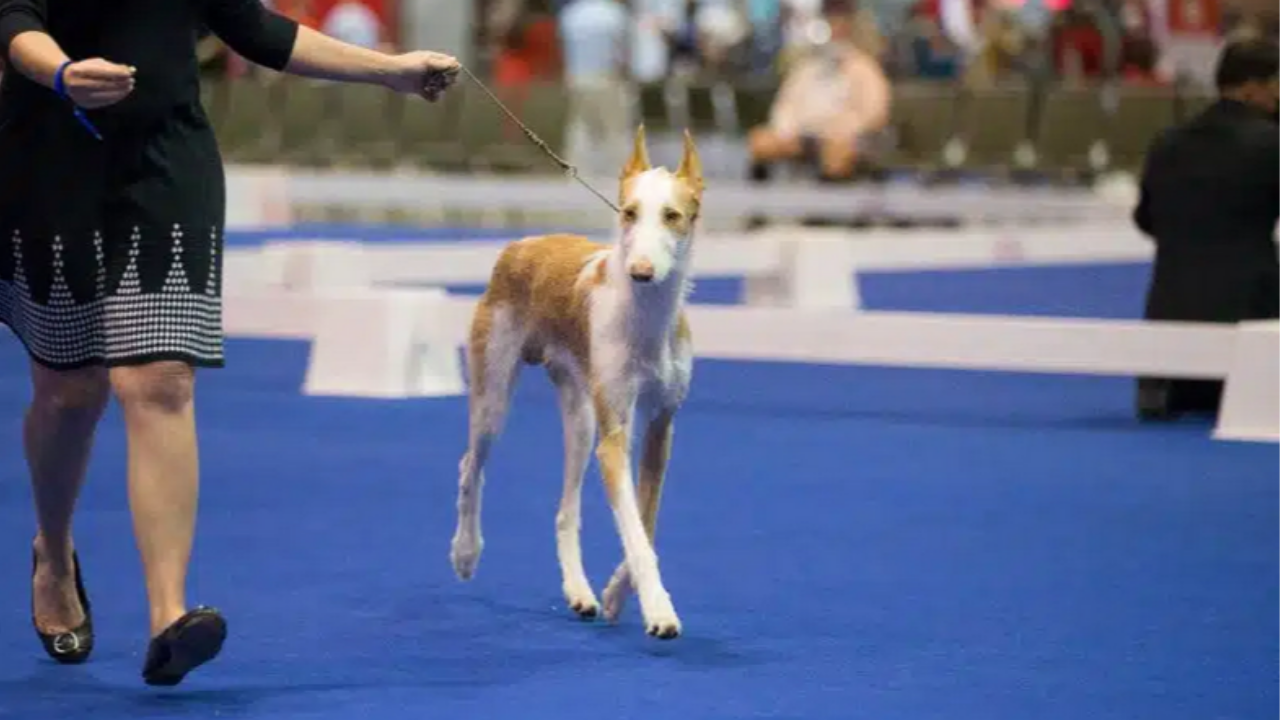 The purpose of the National Owner-Handled Series (NOHS) is to showcase the owner-handled dogs. Despite this seemingly simple objective, the NOHS has morphed into putting the owner handlers under a microscope, in effect, shifting the focus away from the dogs. Judges, exhibitors, and professional handlers are not on the same page regarding both the owner handler and the system of NOHS that is currently in place. This system, I would argue, is built on a structure that is fundamentally flawed.

Professionally, I have worked with owner handlers as their mentor and coach; I judge dogs shown by owner handlers, and personally, I occasionally compete as an owner handler in the National Owner-Handled Series ring. Within these multiple roles I have found a consistent lack of respect and general understanding around the intended purpose of the NOHS. Let’s take a look at the current structural problems and the solutions needed to remedy these issues.

When the National Owner-Handled Series was put in place, it was an add-on and technically remains a Special Attraction. As such, it is not equal to the regular system in its rules, regulations, and guidelines of the American Kennel Club (AKC). I repeat, it is a Special Attraction. This, in itself, sends the message from the AKC to the fancy that competing in the NOHS ring is unequal, and thus, self-fulfilling as a second-tier competition.

Despite this fundamental structural flaw, at this time, owner handlers don’t pay anything extra to check the box and compete in parallel Groups. Neither does anyone who moves forward to the regular Groups. Since neither pays a fee to compete past the Breed level, this process is currently equal. I can foresee a time in the future when there will be separate entry fees for regular and NOHS competitions, or possibly fees to continue beyond the Breed level. Set that thought aside for now.

The National Owner-Handled Series makes up nearly 85 percent of entries at many shows. With the majority and the depth of support that owner handlers give to dog shows, it would seem a “no-brainer” that the AKC and clubs would instantly both pay attention to and provide a deep respect for the NOHS competition. In fact, it would certainly be logical for clubs to provide incentives to draw even more owner handlers.

The NOHS makes up nearly 85 percent of entries at many shows.

The AKC does not take a leadership role in establishing new and updated guidelines around NOHS, nor does it address any of the problems that the system creates. This includes a lack of respect for the equality of the regular AKC judging system and the NOHS system by some judges and some professional handlers.

AKC and most clubs do not publicly promote the National Owner-Handled Series. Specifically, they do not televise the NOHS Groups. For example, the NOHS Groups are not sponsored on national television.

A Look at Solutions to Remedy These Issues

What would it look like if the AKC made changes, and what would the unintended consequences be? What if the expanded marketing and televised Groups piqued the interest of new owners sitting in their living rooms, arms around their beloved purebred dog, watching the owner-handled rings? What if they saw the potential of their Rock Star canine friends and decided to enter their dogs in your city’s show?

Imagine the financial impact if your local show grew by ten percent. Let’s take it even further. What if those new faces came to your town ready to spend the AKC’s estimated $683 per show weekend? And on a grander scale, what if they became dog show enthusiasts ready to spend more money at shows with the vendors? The pet industry is now a $100 billion industry. Money is being spent, so why shouldn’t more of that money support dog shows?

Let’s look at the following scenario:

Televise all the Groups. This new approach could exponentially grow the sport. Let’s do the numbers. As previously noted, according to the AKC, 80-85 percent of dogs are shown by their owners. For simplicity’s sake, at a 1,000-dog show, there would be 800 dogs handled by their owners and 200 shown by others, presumably professional handlers.

Running the NOHS Groups adjacent to the regular Groups would allow for extra ringside support for all, not just the handlers and their assistants cheering their friends on. It is a painful feeling to be the only dog with “crickets” during their individual. What about support for all in both Group arenas?

Equal prizes and equal rosettes. What a symbolic (as well as a physical) display of value and accolade. The owner handlers have long bemoaned the lack of equal rosettes and prizes. This continues to be an issue at some shows.

Require clubs to hire judges who are permit or regular status for each NOHS Group. As a show chair, I am instantly horrified at the possible financial impact of hiring a panel with those requirements. On the other hand, what if the shows took off and the entries surged upward? What if the cost of the judges for the NOHS Groups was covered by more owner handlers entering, because they feel like they’re being treated fairly and equally?

Where judges are concerned, it is true, I have heard, that some judges would rather die (and some have) than point to an owner handler. These judges are not the usual, but they do exist and, sadly, spew their venom rather than judge the dogs. The owner handlers know who these judges are and withhold their entries accordingly.

There is an uproar that must be addressed on behalf of owner handlers who have come across judges who speak openly about their negative feelings about the NOHS or owner handlers. When judges are sharing negative comments on social media, it is not only inappropriate but also personally painful for those at the butt of these comments.

Judges sign contracts that sometimes include the request or requirement to judge National Owner-Handled Series Groups. If a judge is so reviled by judging NOHS, they may opt-out of that club’s shows or opt-out of NOHS in their contracts. In this case, the club chair who slots the panel will have to hire extra judges or those with more Groups because of this requirement. The good news is that the owner handlers don’t have to be judged by someone who looks down upon them and their choice of a competitive field.

In this case, AKC would also need to develop a database of those willing to judge NOHS. We know it is possible, as the system is in place, just like when judges choose to limit their days to 150 instead of the highest number of 175 dogs, or for judges who choose to exclusively judge Junior Showmanship at Specialty and Group Shows. AKC’s online show system could pull out the judges who “don’t” judge NOHS. Instead of the judge automatically being shown as eligible for a specific NOHS Group, it simply wouldn’t show up on their pages.

We all know that professional handlers bring numbers, yet I hear from that court that even the most famous and select professionals are carrying fewer dogs, even to the larger shows.

Assistants are fewer and farther between, because many want to join the ranks of professionals as soon as possible to take advantage of the financial gain through professional handling status. With fewer dogs being brought to shows by professionals, the owner handler ranks add additional fuel to the above arguments.

A Look to the Future

Not only is there a financial benefit to developing respect for the National Owner-Handled Series, there is also the new energy that beginners bring to any arena. “Beginners Mind” is a practice that encourages approaching activities with an open mind. Such a mindset is conducive to developing leadership qualities in existing community members and an atmosphere where natural mentoring can occur.

Not only is there a financial benefit to developing respect for the National Owner-Handled Series, there is also the new energy that beginners bring to any arena.

This quality of connection and humankind is at the core of community building and it’s what I do with my work at Dog Show Mentor. Exhibitors, judges, and clubs need to be on the same page. There needs to be a party line of deep respect for the NOHS. If AKC implemented these recommended solutions, owner handlers would be moaning a lot less! The owner handlers are definitely the ones who could make the sport grow further and faster.

NOHS: A Fundamentally Flawed Structure Dec 15, 2022
The Best Kept Secret in Training Your Dog for the Show Ring Nov 14, 2022
Layers of Genuine Learning That Can Happen at a Dog Show Oct 21, 2022

Stay connected with news and updates! 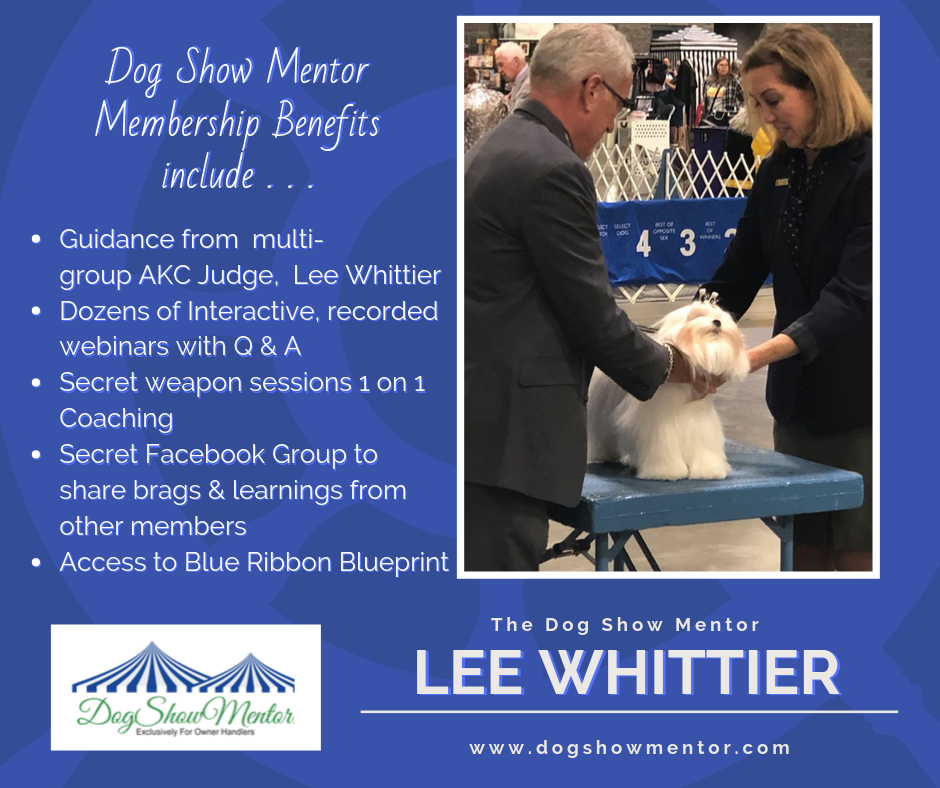